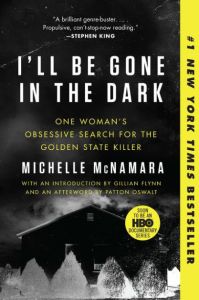 It’s a warm day here down in the south. I have my curtains pulled back and my windows open. My apartment is cloaked in sunshine and there is a light breeze in the air. The exact opposite of the atmosphere you’ll find in I’ll be Gone in the Dark by Michelle McNamara. The nature of the crimes detailed will make you jump at every little noise and second guess every shadow.

I’ll Be Gone in the Dark details McNamara’s obsessive search for the then unidentified Gold State Killer (GSK), also known as the East Area Rapist and the Original Night Stalker (EARONS), a serial rapist and murderer who terrorized California throughout the 1970s and 1980s. Unfortunately, McNamara passed away before she could complete the book and, most tragic of all, before she could finally see the GSK unmasked. Billy Jensen, Paul Haynes, and her husband Patton Oswalt worked together to to complete the book after she passed. I felt they did her and all of the extraordinary research justice. Even in the chapters and sections that were complied by them from her notes, you can hear her voice shining through the pages.

In my eyes, the plot of this book can be summarized in three parts: Michelle’s past and personal experience crime, the GSK’s crimes and victims, and the history of forensic science. Instead of separating each section and providing all of the background information upfront, McNamara seamlessly interweaves all three parts together. The book never comes off as disjointed, rather each part serves to bolster and explain the others. McNamara’s past serves to explain her dedication to these cases. The forensic history serves to explain where and why the investigators struggled to find answers. And of course, the crimes and the victims, this is the story that must be moved forward.

My favorite part of this intensely researched and thoroughly told book is the respect McNamara gives to the victims. She says their names and tells their stories. There is no blame, no judgement, just an honest retelling of what happened to them. In the end this book is about them and the justice they deserve.

The GSK, Joseph James DeAngelo, was identified and arrested on April 24, 2018, only a few months after I’ll Be Gone in the Dark was published. While police said her book didn’t provide any specific information that led to his arrest, their use of the GSK moniker illustrates the crucial role she played in keep this case alive and in the media. Overall, I’d give this book an easy five out of five stars. It’s interesting without being sensational and fact-based without being dry. This book should be mandatory reading for all those interested in true crime.

1 thought on “BOOK REVIEW: I’ll Be Gone in the Dark by Michelle McNamara”